I really didn’t have any expectations going in about this movie.  Being able to see minutes or hours into the future is not a new concept for science fiction time travel movies.   And top indie movies with a sci fi thriller element like Time Lapse are not ten a penny!

Furthermore, Time lapse (2014) is a low budget independent film.  No matter, I was delightfully amazed at how director Bradley D. King pulled off the story in such a way that I was captivated until the end. 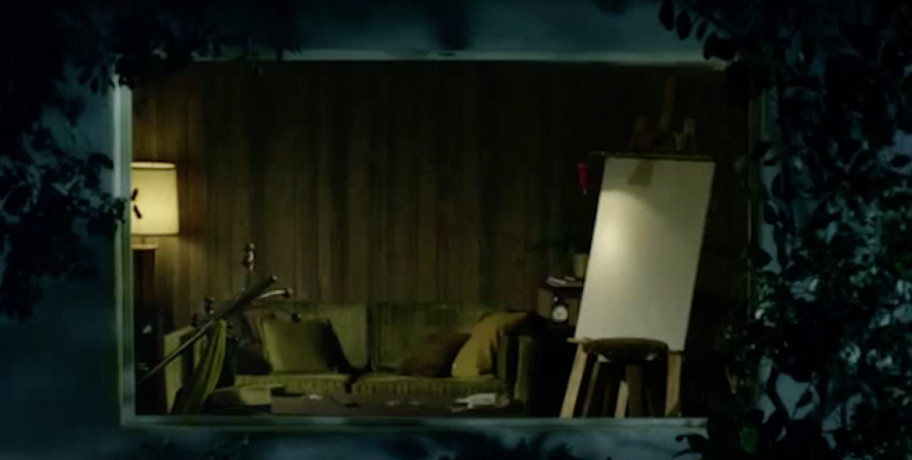 Concentrating intently on his painting Finn (Matt O’Leary) is interrupted by Jasper (George Finn), one of his flat mates barging into the room with shopping.  Jasper peers over his shoulder to comment that the painting looks great but infers it took a long time.  Cursing at him he retorts that in fact he is perfectly happy where he is at and he just hit a creative block before.

Finn is the building manager of Sycamore Apartments and lives with Callie (Danielle Panabaker), his girlfriend and of course Jasper.  Jasper answers the phone when Mrs Anderson rings their apartment asking for help to fix her toilet.  He tells her that the building manager is with him and is willing to come over and help her now.  Jasper teases him and repeats his words back to him about being happy where he’s at.

Dreams Down The Toilet And Seashells

Displeased about having to go Finn grabs his bucket and plunger and makes his way to her apartment.  Babbling on about someone she knows going to art school we only see Mrs Anderson’s legs behind Finn’s head.  Finn is crouched down over the toilet seat.  Commenting on what a coincidence it is that her building manager used to be a painter Finn momentarily stops what he is doing.  (Talk about literally and figuratively kick a man when he’s down!)

Arriving back at their apartment he’s greeted with Jasper hunched over a crystal ball he just bought at a garage sale.  Rubbing his hands over the glass and looking into the ball Jasper is desperately trying to see something.  He finally decides he has seen seashells.  Picking up the newspaper Jasper starts to read down the list of greyhound names.  “Outlaw, Rambling Rose, Crab Apple.”  Confirming with Finn that crab apples can be found in the ocean he kisses the crystal ball and exclaims he will bet on Crab Apple.

Collecting chairs from a storage room in the complex for their house party he spots a trilby hat laying on the floor.  Picking it up he hangs it on the door handle of room number 8.  Struggling with all the chairs the complex’s security guard Big Joe passes by and helps him carry them to his apartment.

Jasper is watching the Crab Apple race on TV.  Callie is out back in the kitchen.  Shouting to her in the kitchen he says that he’s invited Big Joe to the party.  “Okay as long as he doesn’t wear that tacky rent-a-cop uniform,” she shouts back referring to Joe’s security uniform.  Finn points out her blunder and she quickly apologises to Joe and runs out to check on Mr Bezzerides (Mr B). Seemingly, Mr B is late with his rent and Joe noticed a couple of parking tickets on his car and Callie is a little worried about him.

Punching the cushions in angry dismay because Crab Apple lost the race Finn tells him to chill out. 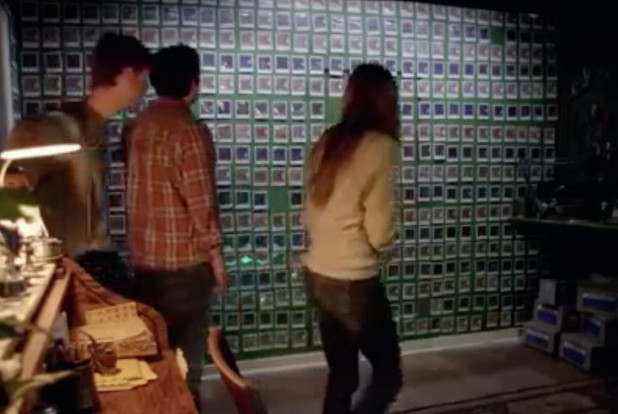 At Mr B’s front door Callie sees old newspapers piled up outside and decides to open up and check that he’s okay.  She goes into a room that has a curtain of plastic strips hanging down instead of a door.

Going back to their apartment she walks in and stares at the boys with a shocked look saying nothing.  They all go to Mr B’s apartment to see why Callie is in shock.

Hundreds of Polaroid photos cover a green wall.  On closer inspection the photos are all of their living room at different points in time: Finn standing staring at his easel.  Jasper sitting on the sofa.  Callie in the yoga tree pose.  Jasper thinks Mr B was a peeping Tom.  Callie points out that he wouldn’t have had photos of their living room empty if that was the case.

Turning round, Finn is faced with a big machine with green glowing parts and blurts out, “What is this thing!?”  Polaroid film in boxes are laying on the floor nearby and Callie suspects that it is a giant camera.  Hanging out of the camera is a new photo and Finn inspects it.  Empty, it is their living room yet again but with the coat rack knocked over.  No-one remembers how it happened but guess it was playing drunk charades.

Taking her jacket from the coat stand Callie accidentally knocks it over.  Obviously disturbed by the incident they head over to Mr B’s to check out the photo.  It matches.  But is it a coincidence? Seems like the camera took a photo ahead of time.

While trying to work out what’s going on the big camera machine flashes, makes a noise and spurts out another photo.  This time it’s of people partying in their living room.  And the party hasn’t even happened yet.

Realising Mr B has invented a camera that takes pictures of the future they start to search round for a scientist’s log book or something similar to understand more.

Callie finds a notebook dated 27th November from Mr B. Recording that the machine is working perfectly well he is devastated at witnessing his own death.  Knowing the rules about time and causality and not attempting to change the future it is clear that is exactly what he tried to do.

Top indie movies with a time travel theme are few and far between so make sure you watch this one in your future.

Are you going to watch this indie movie?  Did the above taster wet your appetite?  Tell me why.

If you’ve seen it already, give me your opinion in the comments below.