Meet Jennifer Lawrence when she was not so well-known as she is now.  Winter’s Bone is one of the top mystery movies to come out of 2010.  That year there were a lot of top grossing movies that year over shadowing the smaller, independent films and so you may have missed this one.

Obviously super famous now for many great movie performances (X-Men, The Hunger Games) she should not be forgotten for her superb acting in this movie.  Playing a less than glamorous role as Ree Dolly, a 17-year-old looking after her destitute family in a desolate town with no support.

The movie is not for the fainthearted as it contains some disturbing scene as we see Ree meeting unsavoury people and having some dire experiences whilst searching for her father. 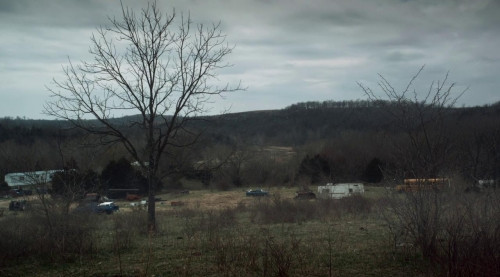 Having fun in their backyard Sonny (Isaiah Stone) and Ashlee (Ashlee Thompson) bounce on a mini trampoline and gently cuddle tiny puppies.  While Ree’s younger brother and sister play she hangs out clean clothes on the washing line.

Their house is old and rundown and sits in a bleak rural area in Ozark, Missouri.

Morning arrives and Ree splashes her face with water at the kitchen sink and softly wakes her siblings.  The children are wrapped in covers asleep on the sofa.  Throwing a dollop of fat into a well-worn frying pan Ree slices potatoes and drops them in.  Huddled in her bed blanket Ashlee watches her big sister (come makeshift mother) prepare something to eat.  Ree opens the fridge and grabs a round plastic tub and peels back the top for a smell.  Pulling a face she passes it to Ashlee to take to the dog. 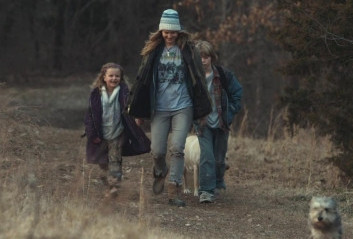 The children’s mother smiles serenely with her head back as Ree lightly combs her long brown hair.  Completely unresponsive it is obvious that she is unwell.

Ree tests Ashlee with her spelling and math as the three children walk to school.  After making sure that her brother and sister are settled into their classrooms Ree leaves but not before having a look at what kids her age are up to.  Ironically she sees a parenting class where the teenagers are learning to hold babies with plastic dolls.

Peering into a gym where Marine Corp. cadets are marching in place she stares enviously at them.  However, she marks her name down on the cadet sign-up sheet hanging outside the gym showing she still has hope regardless of her circumstances.

Due to not having any money Ree asks her neighbour Sonya (Shelley Waggener) to take her horse in so that it can be fed.  Four days has passed since the horse was fed and so Sonya opens the gate to let Ree’s horse in.

With the freezing weather fire wood needs chopping and she sets to with her headphones over the top of her thick woolly hat. Halfway through she is interrupted by the sheriff’s patrol car pulling up.  Immediately she stops and stands at the front door. Requesting to speak with her mother she lets him in but warns him that her mother doesn’t speak much.

He’s only in the room a few seconds before returning to speak with Ree.  Sheriff Baskin explains that he cannot find her father Jessup Dolly.  “Maybe he sees you and ducks,” she says.  Cooking meth and not being around for his family is the reason that Ree has so many responsibilities.  However, she still stands up for her father saying that the police have to prove he did something before they can charge him. 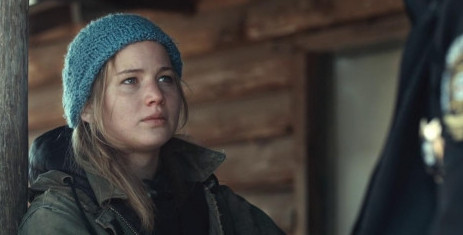 Mis-understanding why he is there the sheriff advises her that the situation is far more serious than that.  Apparently, if her father does not turn up for his court date the family will be homeless as the house is part of her father’s bond.  Stunned but stoic and calm Ree tells the sheriff that she will find him.

She ventures out to see some family members and receives threats and warnings to stop trying to find him.  Showing her a burnt out old shack that was a meth joint she’s told her father got fried there.  Knowing her father is seemingly a good “cook” and has never blown up any meth places before she doesn’t believe it.

She continues to encounter more harsh situations as she comes up against family and people holed up in the back of beyond.  The movie becomes darker and more depressing as she continues head strong to find him.  In contrast, the suspense coupled with her hope and courage keeps you glued to your seat in anticipation of the outcome.

I’ve got a thing about the Southern drawl.  I mention this (1) to share what I mean and (2) to pre-warn warn you if it ain’t your thing.  Because there is a lot of the accent in this movie.  A Southern drawl is very pleasing to my ear but I’m not exactly sure why.

Now, it could be because one of my favourite actors is that handsome Texan Matthew McConaughey.  Or maybe because there are many movies that I love based in the South.  Bette Davis is also one of my favourites and she has played a Southern belle at least three times: Hush….Hush, Sweet Charlotte (1964), Jezebel (1938) and The Cabin In The Cotton (1932).  In that movie she had the immortal line, “I’d like ta kiss ya, but I just washed my hair“:

There’s A Book Too 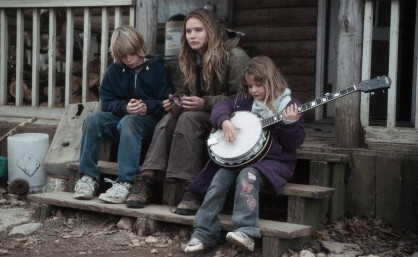 Adapted from the book by Daniel Woodrell director Debra Granik has created a real life horror movie.  Horror in the sense of abject poverty, unsolicited violence, fear and suffering. (Not your Freddy Krueger type horror.)

I saw this movie a few months after it came out by chance.  I was searching for a gritty mystery movie that was not a big blockbuster. Searching for something independent I came across Winter’s Bone on the Sundance Film Festival site.  It won Best Screenplay Award in 2010.

I was not disappointed and neither will you be if (1) you’re looking for a top mystery movie or (2) you’re a Jennifer Lawrence fan.  She gives a truly spectacular perfomance.

It is one of the top mystery movies of 2010 and if you’re okay seeing in Lawrence in a woolly hat and tatty ankle hugging jeans then go for it.

Let me know in the comments if you missed it and if you are tempted to watch it now, and if so, why?  Or did you see it already?  Great!  What did you think of Lawrence’s performance?

Respect to the image makers!

All images in this post are from film-grab.com (except the DVD cover)